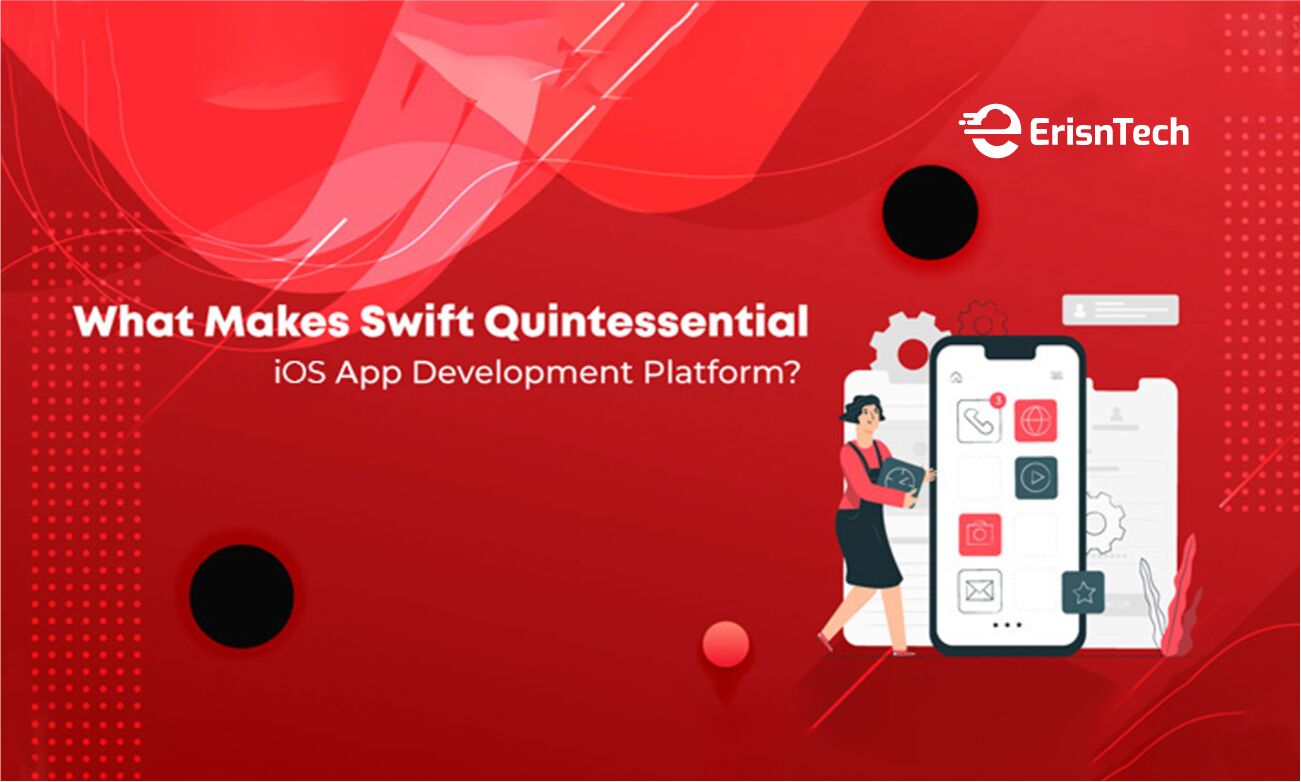 When you aim to develop a perfect iOS app, the first thing that you need to choose is the language that you will need for the project. Before Swift was launched, apps were developed using Objective-C – a programming language that is quite difficult to master. But, now, Swift has changed the way iOS apps are developed.

In this blog, let us see why iOS app development with Swift is considered the right choice by developers.

Swift is a highly intuitive pro-developer programming language introduced by Apple in 2014 for iOS app development worldwide. It is developed with the main objective of being beginner-friendly for the developers. Writing code using Swift is expressive and enjoyable at the same time as it is easy to understand and code.

The core features of Swift application development include – Safety, Fast, and Expressive. It allows developers to write code safe, fast, and expressive like a story.

And the best part is, Swift is also an intuitive and reliable programming language used to build apps for all Apple products like iPhones, iPad, MacBook, Apple Watch, and Apple TV.

Swift is compatible with devices with OS iOS7, OSX10.9, and higher.

There are various methods and criteria to evaluate a programming language like operational semantics, syntax, structured programming, compatibility with other languages, and more. However, syntax and capabilities are considered the crucial factors in evaluating a programming language. Let us see how these two elements concern Swift.

Syntax in programming language refers to the set of rules and regulations that describe the order and interdependency of words, characters, and grammatical structures in a programming language.
Syntax of Swift was initially a part of objective-C. But, several changes have been made over the years. These changes have made the Syntax structure of Swift simpler than Objective-C, offering an exceptional user experience, taking the business to the next level.

Swift allows easy integration of open-source dynamic libraries. These libraries contain instant solutions for routine tasks that let the developers reduce the size of the application, thus saving space in the memory of user devices.
So, why is Swift preferred for iOS app development?

Swift by Apple is a groundbreaking iOS and iPhone app development programming language, which can help develop apps that run flawlessly. Despite being young, Swift is gaining more popularity among iOS developers, day-to-day. This can be because it ensures secure, safe, and risk-free coding. Let us take a look at a few key benefits of Swift for iOS app development.

One of the most significant reasons that Swift outperforms Objective-C is it is easy to read code. Being available in plain English, codes in Swift are easy to read and write. Furthermore, Swift does not require many legacy conventions, such as semicolons, end lines, and more. Thus, only a few lines of simple, clean code are required to implement an option.

The success of any app does not stop with its launch. It needs to be updated frequently so that users can enjoy it for the longest possible time. Swift is a lot easier to maintain or update as it does not have dependencies like Objective-C.

Apps developed using Objective C had to sustain two code files if the developers wanted to improve the efficiency of the code. But, Swift combines (.m) and. (h) files into a single (.swift) file.

In this digital world, where the data breach of apps is more common, it becomes crucial to develop apps with the highest security. The clarity present in Swift makes it less prone to errors, and it also has lesser code crashes when compared to Objective-C. The developers can instantly see the code errors and fix them right away because of the short feedback loop.

With researches revealing that Swift is 2.6x faster than Objective-C and 8.4x than Python 2.7, it is certainly one of the fastest programming languages to choose for iOS application development.

Another important benefit of using Swift is, it is fully compatible with Objective-C. Thus, it allows the iOS app developers to import the framework from Objective-C and use its method using Swift code. In simple terms, apps built with Swift can have a multi-language codebase.

“Swift Playgrounds” is an interesting feature that lets users learn the language with ease. Even newbie developers without extensive knowledge of Swift can write and test their code using Playgrounds with ease. This feature not just fastens the learning process but also reduces the development time.

Swift supports dynamic libraries. Dynamic libraries are executable codes that link one version of the Swift app to other versions. It helps in updating the apps and uploading the new version of code to the memory. It reduces the app size significantly, which in turn speeds up the process of downloading.

One of the most important benefits of Swift for e-commerce development is its Application Binary Interface (ABI). Swift’s ABI is highly stable that greatly benefits business owners. It will make the app development process simpler as these apps will not include any libraries.